It is currently November, aka Christmas pre-season, so I thought I’d start preparing my wish list for the upcoming year of health campaigns.

Watching a televised marathon, it can be difficult to fully comprehend the speed and talent of the athletes.  Sure, the runners look pretty fast, but are frequently so composed that the true strain of 26.2 lightning fast miles is lost on the viewer.  Asics and Vitro recently developed a campaign to promote the New York City marathon, allowing even couch potatoes a chance to compete with the best.  A long screen was set up along a wall in a New York subway station that counted down to a 60-foot race against Ryan Hall, an world record holding American endurance runner.  Digital Ryan looks relaxed, like he’s enjoying a casual jog.  In reality, his casual jog is a sub-5 minute mile pace.  Ambitious passersby sprint next to him.. and eventually behind him.

I love this campaign’s clever use of technology to stimulate curiosity and physical activity.  Imagine a hanging poster that reads: “Run this 60 foot stretch as fast as you can!  Fitness is fun!”  Probably not as motivating.  The huge video screens are attention grabbing and viewers are engaged by a simple question, “Think you can keep pace with an elite marathoner?”  The location choice is also very smart.  After sitting on a subway for extended periods of time, many people get antsy and bored.  This campaign gives pedestrians the opportunity to burn off some energy and stress.  I think an airport would be another great spot for a digital race.  Maybe we will see Usain Bolt at O’Hare sometime. 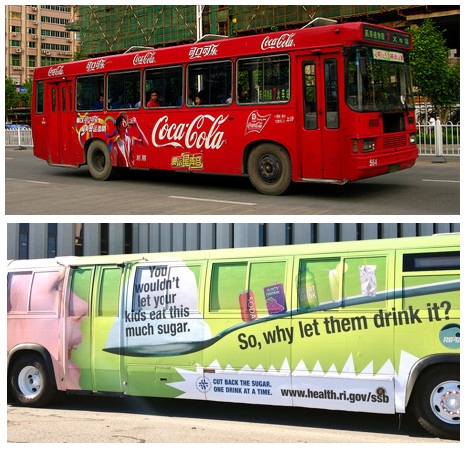 I understand both the necessity and comfort of commercial advertising.  Advertisers sell dreams of a better and happier life through cool stuff.  Public service announcements sell you the cold hard facts of reality through data.  Not as much fun.  Yet ads on public transportation become mobile billboards.  This becomes a great opportunity to get people to think about health, even if briefly, while navigating through traffic.  The above ad is from the Rhode Island Department of Health.  Though the visual is an eye-popping reminder of how much sugar is in soft drinks, I can also understand where this message would be off-putting to some.  The Asics campaign focused on fun, while this one focuses on personal responsibility in parenting and nutrition.

But if advertisers can put a fun spin on awful things like cigarettes, why can’t we bring more talent like that from the dark side over to health advocacy?  It would be great to see cities full of bright, creative, positive ads that inspire people to live healthier and more fulfilling lives.  Of course, this is in my fully funded, magic utopia land where you can find PSAs on busses and benches and unicorns.

3)  Beyonce Knowles as the best P.E. coach you never had

Michelle Obama’s “Let’s Move!” campaign was created to help stop childhood obesity.  But instead of focusing on diets and numbers on the scale, the campaign promotes active and healthy lifestyles.  This creates a more sustainable, personally motivating change.  One innovative promotional tool was a choreographed fitness routine featuring Beyonce and company.  Children learned this routine and performed it in schools as a flash mob, or a large synchronized event (sometimes including Beyonce herself!)  But the fun didn’t stop there!  A quick youtube search uncovers dozens of “Move Your Body” performers, both young and old alike.  The choreography looks fun, Beyonce looks fun, the kids look fun, so that becomes contagious.  Really, fun is one of the few contagions promoted by public health.

It would be great if more stars could use their persuasive public personas to promote great health messages to younger generations.  Maybe different stars could do a few choreographed projects per year that kids could learn and perform at assemblies. Or maybe celebrities could spread their influence around a few other causes. Rihanna for influenza vaccinations!  Neyo for calcium!  Lady Gaga for bicycle helmets!  All those Twilight people for sunscreen!  The possibilities are endless!

Roland Barthes once said “Sex is everywhere, except in sexuality.” There is an exaggerated myth of sex that nests in Axe deodorant commercials, CW teen dramas, Megan Fox movies, the Billboard top 100, Hardees ads, paperbacks in the supermarket, etc. This sanitized sexuality is immensely profitable, but not entirely realistic. How often do star crossed lovers sit down in a movie to discuss test results and contraceptive options? Can you imagine that scene in The Notebook?

Mood killer though it may be, realistically acknowledging the potential for disease is a crucial step to prevention. The good news is that many STIs are easily cured with antibiotics. The bad news is that many arrive unnoticed. Some sexually transmitted infections develop without any symptoms at all. Individuals may not know anything is wrong until more severe complications occur, from fertility problems (e.g. gonorrhea) and neurological damage (e.g. syphilis) to death (e.g. HIV).

One of the most common STIs is the bacterial infection, chlamydia.  Chlamydia can damage the reproduce organs if left untreated and can lead to problems during pregnancy, including infant pneumonia and eye infection.  Symptoms can be mild and appear after several weeks, but most people never have symptoms at all.  Treatment is simple.  Antibiotics can cure the disease within a week.  The problem is those who have chlamydia often don’t know and may not take the steps to prevent the disease from damaging themselves or spreading to others.  Missouri in particular has had a higher incidence rate for chlamydia than the national average since 2002.  The national benchmark is 83 cases per 100,000.  In 2011, Missouri’s rate is 422 cases per 100,000.

Latex and polyurethane condoms can prevent the spread of STIs if used properly and access to condoms has improved a lot over the years in many cities. But preventing transmission to others is just one part of sexual health.  STI screening is incredibly important and often brushed aside due to embarrassment or fear.

The GYT or “Get Yourself Tested” campaign was launched by MTV, the Centers for Disease Control and Prevention, Planned Parenthood, and the Kaiser Family Foundation.  Their website includes basic information about testing procedures and STIs, but also examples of how to talk to sexual partners and health care providers.  Additionally, GYT hosted a sweepstakes with Foursquare in 2010.  Each person who checked into an STI testing center with Foursquare was entered to win a trip for two to New York.  Not only did this provide additional incentive to get screened, but it also helped increase awareness.  One way to reduce the stigma of STI testing is to show how easy, painless, and widespread it is.  As more people admit to getting tested, others will trust their peers and possibly get tested themselves.  If social networking could raise even half the awareness for chlamydia as it did for Charlie Sheen catchphrases, incidence rates could plummet. 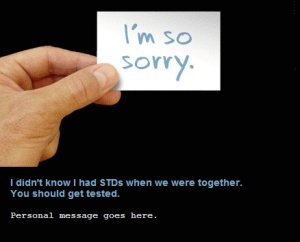 InSpot is a web service that promotes STI testing, though a bit more urgently.  The site gives the opportunity for those recently diagnosed to alert up to six people at a time via emailed postcards, which encourage partners to get tested.  Cards are available in both English and Spanish.  While the GYT campaigns worked to reduce stigma by raising public awareness, InSpot’s needs are a little different.  It gives the opportunity to help protect the health of others while avoiding the awkward confrontation.  InSpot’s website also gives tips for talking about STIs with others and general information about treatment.

Both campaigns have some great qualities and perhaps a combination of the two could help to reduce Missouri’s rates of chlamydia.  Offering incentives to get screened could boost participation rates.  A multiphased system may seem like overkill to some, but given the high STI rates, it’s better to be overprepared than underprepared.

When I bought a bike this year, I was very excited to explore my accessorizing options.  Fenders, panniers, Hello Kitty-shaped bell, that metal thing,  the metal thing that goes over the other metal thing…   The opportunities for complete customization glory are endless.  But I admit, I struggled with the dreaded bike helmet.  My brain said “Protect me, I will make it worth your while!” while my socially constructed sense of cool said “Your head looks enormous.  You look like a Styrofoam lollipop.”  I sucked it up and bought one, but I was surprised that after all these years, I still had a very embedded reaction to a perfectly innocent piece of plastic. 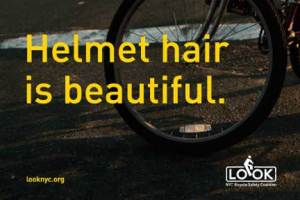 Bike helmets are under appreciated.  They serve to protect their owners, but they are deemed “uncool” by many.  The Centers for Disease Control and Prevention reported that head injuries account for 68% of bike-related hospital visits and 67% of bike related fatalities.  That is a lot less cool than wearing some foam on your head.  But the CDC also reports that students in grade school are the least likely to wear a helmet, with only 15% of cyclists less than 15 years old wearing them.  Injuries are higher for children and teenagers.  Both groups are more likely to ride bikes while often being less familiar with traffic patterns.  Both groups are also growing, changing, and developing habits that they will carry into adulthood.  It seems to be the ideal target age for bike safety campaigns encouraging helmet use and teaching safe riding basics. 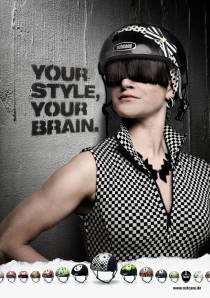 Bike helmets have also changed a lot over the years.  Though they are still created with function primarily in mind, form has begun to shift and adapt to the aesthetic desires of the modern bicyclist.  Nutcase helmets are slick, bright, and graphic.  Their designs range from the understated (stripes, plaid) to the whimsical (watermelon print, smiley face).  While the designs may be unconventional for typical safety gear, they are tested and fulfill the same requirements as any other equipment.  They also have some pretty catchy ads to promote and sell bike safety.  Here, they merge personal identity with health with the slogan “Your style, your brain.”  Mentioning the brain specifically reminds the audience of what is truly at stake, rather than generically saying “Protect your head with a helmet.”  The model’s bold style is complimented by her helmet, combining aesthetics with safety.

Social norms dictate what is cool and uncool and though powerful, they are not permanent.  What is cool one season may be seen as tacky the next.  The ubiquitous popped collar look of freshman year faced severe backlash and is now in the fashion graveyard alongside JNCO jeans and hypercolor tshirts.   Companies like Nutcase and Yakkay are attempting to give the bike safety a modern twist, encouraging more people to give helmets a chance.  Giving a secondary advantage, like being unique and hip, could help strengthen the primary advantage of safety.

While wearing a helmet is beneficial, simply purchasing one isn’t enough to stop injury if the cyclist wears it improperly or rides recklessly.  Education is crucial. Many critics argue that bike helmets encourage daredevil behavior because the cyclist feels invincible, making questionable decisions under an inflated sense of security.  Helmets may help prevent injuries, but they are only one part of the responsible cyclist’s arsenal.  Learning how to share the road with cars and make safe decisions in transit is just as important. Cyclists should fill their heads with safe riding information and then top it off with a helmet for the ultimate protection.
References:
http://bicycleuniverse.info/eqp/helmets-nyt.html
http://www.cdc.gov/mmwr/preview/mmwrhtml/00036941.htm
http://theinspirationroom.com/daily/2007/new-york-city-bicycle-safety-look/
http://theinspirationroom.com/daily/2009/nutcase-your-style-your-brain/